I meant to blog on the fourth but I was too busy doing nothing which was just spectacular.  Dave and I intentionally took a relaxing day off and the only work we did was water the cows and the garden.  So Happy Belated Independence Day!  I hope you celebrated your freedom and the birthday of the greatest nation in the history of mankind.

Dave and I got a special treat on the evening of July 3rd.  President Trump was holding his rally at Mount Rushmore, and while we did not attend, we got our own private airshow in our back yard.  We were sitting on the porch and noticed three B-1s flying in a circle overhead.  This went on for sometime and we figured they would be doing the fly-by to open the Mt. Rushmore ceremony.  Then, three F-16s showed up and also began circling right over our yard.  THEN the Blue Angels showed up and also circled over our house for about 20 minutes.  It was Awesome. What a cool thing to see right from your back porch!

It has been hot here, and dry.  I don’t think we’ve had any significant rain since May and consequently our barley crop turned brown, and began to shrivel up.  In the hopes that we might salvage some hay, we went ahead and mowed some of the fields.  We tried to rake and bale and in a field where we got 153 bales last year, we were able to piece together 10.  Ugh.  If we keep all the cows that would be about a day and a half of feed next winter. 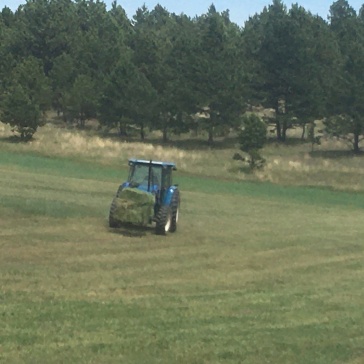 Needless to say, we are a little more than disappointed, but that is part of the ranching/farming life.  It’s a continuous sine wave where one day you’re riding high and the next you’re way down in the dumps.  But who knows what tomorrow will bring?  We could still use some rain, everything is drying up and while we have made up our mind that we will just buy hay this year, we are hoping the pastures can support the herd for the summer.

In more exciting news, we went and picked up the bull we are leasing for the next two months.

This is Moscow (that’s what the owner named him, not sure why but we like it and hope he’s not a Russian spy).  We met the owner in Edgemont and swapped him from his trailer into ours.  That gentleman bull did not even make the smallest mess in our trailer so we appreciate that too!  When we brought him to the pasture with our cows, the cows were over the hill in the far corner.  He got out of the trailer and immediately picked up their scent.  He began walking in circles trying to determine where all the cows were and then he started to get a little frustrated, pawing at the dirt and grunting.

Meanwhile, Dave started calling the cows, and yes they do come when he calls because they love him and think it means he has cake.  Moscow heard them mooing as they came up over the crest of the hill he called back to them in that crazy high pitch sound that only bulls can make.  Valentine, the one cow that was open all year came sprinting down the hill.  She was so excited there was a bull in the pasture. Of course when one cow starts running they all start running and poor Moscow was a little intimidated I think.  He stopped and stood completely still, completely nervous and scared of the group of lonely ladies surrounding him like he was Elvis  and they were a fan-crazed group of teenagers.  That didn’t last long, however, and almost immediately he embraced his rock star status and the whole herd went back over the hill together, most likely looking for some privacy! I’m pretty sure I heard some Marvin Gaye playing over there.

We were really happy that no one decided to fight and we have observed him doing his job several times so hopefully everyone will get bred and have healthy babies next spring.

Shifting gears, I have bad news about the bee colony.  I opened the hive in late May and they were thriving.  There were eggs (indicating an active queen), brood, and lots of pollen and uncapped honey.  About two weeks after that I noticed a dramatic decrease in bee activity and a giant pile of dead bees in front of the hive.  I put on my bee suit to investigate and discovered that almost all the bees were dead.  There were no longer any eggs or even brood or honey stores.  The colony is dead or gone, but the big pile of dead bees leaves me to believe they didn’t swarm and leave.  I’m not sure what happened but am still doing some research to try to determine what killed them.  It is too late this year to get new bees but I will try again next year.  It’s sad, but again, that is the roller coaster that is ranch living.

On the positive side, the garden seems to be doing well, the cows are fat and happy, the dog is hot and unhappy except in the morning and evening, and the cat remains healthy and crazy.  So as far as Hoten Holler life goes, all is pretty good.  We hope everyone out there in the real world enjoyed the Fourth of July and is keeping happy and free.  God Bless America!