I know Mothers’ Day was yesterday, and to all the mom Hoten Holler Follerers I hope you had a great day, especially to my mom, who is just completely awesome!  I was hoping that she and Dad could visit for Mother’s Day but I think they’re glad they didn’t because we are getting snow!

And in honor of our adorable mother cows, here are some gratuitous baby pictures. 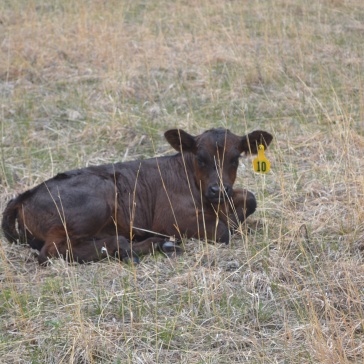 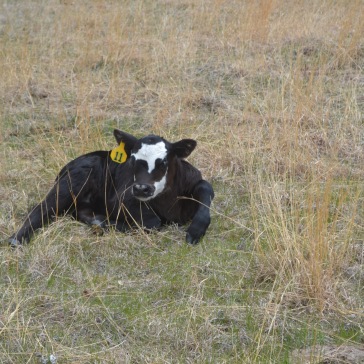 We are so happy to be finished with calving season, and so far everyone is doing great!  Since we have two bulls and two heifers, we are calling them the Mixed Doubles.  (Note the moms are all members of the 2017 class we call Mayflowers, and the heifers that will get bred this summer are members of the 2019 class we call the Brambleberries.  We name things, it’s how we roll.)

The remaining babies came all within one week, which was great.  Hunny started on the 29th by sneaking out her calf in between the 4AM and 6AM check.  When Dave went out at six, she was already cleaning up the little girl.  She’s #9 so we named her for Dallas Cowboys #9 Tony Romo, but we’re spelling it TONI because she’s such a cute little girl.  She was up and nursing pretty quickly.  Hunny is an experienced mom with Toni being her fourth.  She cleaned off her baby and headed off to the woods for some privacy and bonding.

On the 3rd of May, Triple Sticks snuck out her calf between the 10AM and 12PM cow check.  This is her 2nd baby, a little girl, #10 that we are calling Bo Derek. I checked on Trips at 10AM and she was off by herself from the herd, a tell-tale sign of impending birth, but when she heard me in the Mule she came down out of the woods and right up to me looking for cow-cake. I looked her all over, and while her bag was big, it had been big for over a week.  I thought she would probably calve that day, but not immediately.  She must have watched me drive away and immediately laid down and had her baby because when I went back at noon, Bo Derek was cleaned off and already up and nursing.  I initially thought it was someone else’s calf nursing on her but then I saw the other two babies laying right there next to the new mom while she nursed her baby.  She must have been babysitting when she calved.  Cow multitasking, hmmmmm.

I took the Mule back to get Dave and we went to watch the new mom and baby for a bit to make sure everyone looked good and healthy.  When we got back to the pasture, we parked about 30 yards away to give the new mom some space.  Almost immediately, the Dirty Dozen who is the mother of Henry the 8th, came marching toward us and stopped right in front of us and gave us a big, loud MOOOOOO!  It was like she was saying, “People, please.  This cow just had a baby!  Give her some privacy already!”  Then she collected her calf and stormed off into the trees. She’s somewhat MOOOODY.

Finally, on the 4th of May, Cherry Bomb had her baby around 11 AM.  We saw her at the 10AM check acting very peculiar, walking backwards, mooing and licking her belly.  We stayed and about an hour later she laid down and gave birth to a little bull calf we named Apollo 11.  He is the only calf with a white face and he is so dang cute.  He has white fuzzy eyebrows that remind me of Santa Clause.  It took him about 20 minutes to stand up and he was nursing about 30 minutes after that.

Dave and I are so happy that all the moms did so well, and the babies seem to be doing great.  They put on about 2.5lbs a day, so a week after birth they are all really thickening up as they have put on about 17lbs a piece.  They are so fun to watch, especially at dawn and dusk.  They get really energized and run around in circles, bucking and kicking and occasionally having a headbutting match with each other.  Better than anything on Netflix!

In other cow news, Dave and I drove down to Edgemont to meet a gentleman we are planning to lease a bull from in July.  He was taking the bull to the vet to get virility tested and make sure he was a good candidate for our heifers and cows.  He passed the test with flying colors, although he will probably need some counseling after that whole ordeal!  We look forward to welcoming him to the Holler in July.

Thanks for indulging me and my calf stories.  I finally feel like we are catching up on sleep around here and am grateful every day I see those babies out there in the herd.  I know things are still crazy out there in the real world, and I hope the cow stories can provide a peaceful break from quarantine boredom and frustration.  As I said before, things really haven’t changed too much here!