The First and Last Day of November

I really dropped the ball for blogging this month.  Reading back, my last post was the first day of the month and here we are on the last. They look eerily similar!  We were suffering from the cold weather on the first  and this afternoon we are recovering from a “blizzard”.  I use the quotation marks because we were supposed to get up to 8 inches of snow and have 40mph winds, but really we got about 2 inches of snow and it was just a little breezy. As far as blizzards go, we’ll take it!

Despite what you may think, November was actually very mild.  Thus, the lack of blogging. We had many days in the upper 40s and a few in the 50s, lots of sunshine, and there was no reason to come inside and spend time on the computer.  Instead, Dave and I worked on some random projects around the ranch and tried to drink up every drop of sunshine we could.

We did resolve some issues this month.  The Horny Toad cow was hauled away by her owner and the Mayflowers were left to graze the northern pastures in peace.  Their demeanors really did seem to change after that crazy cow left and all seemed right with their world.  Meanwhile, the Brambleberry calves were as quiet as ever during weaning.  About two weeks ago, we opened up the gate and they reunited with the big cows.  The calves didn’t seem too concerned about re-meeting their mothers, except Andie, who tried to go right up to her Mom, Hunny.  Hunny wasn’t having it and gave Andie a few warning kicks. Andie decided that hay is better than milk since hay doesn’t involve a hoof to the face.

Here we are two weeks later and we have been watching closely and the calves seem to be successfully weaned so the moms are free to load up on calories for their next calves.  We will know for sure who is pregnant this week, as the vet is coming out to give the young calves some inoculations, pour everyone to prevent worms, and check the big girls to see if the bull did his job.

The past three days have been full of weather related anxiety.  On Wednesday, we woke up in a literal cloud.  The fog bank lingered until late Saturday afternoon.  It wasn’t that cold but it was unusually humid for us and the east wind froze all of the moisture in the air on the east side of trees, the barbed wire, and  the cows! 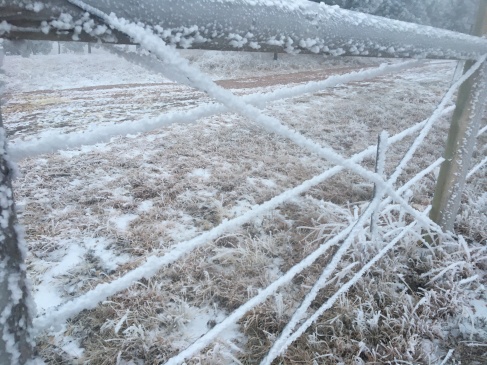 The entire Holler was completely covered in ice and we were glad we weren’t traveling and that our families weren’t travelling for Thanksgiving.  We didn’t want to make a whole turkey for just Dave and I because we could never eat it all, so I bought a turkey breast  instead.  Dave pulled it out of the freezer to defrost it and said, “Did you mean to get a cajun turkey breast?”  I did not, but one consequence of refusing to wear reading glasses to the grocery store is that you often end up with the unexpected.  We had a great Thanksgiving, with the exception of that Cajun Turkey.  Sorry to any of you Creole-folk but who would add this flavor to their turkey? I understand a good cajun seasoning on shrimp and seafood, but this seems like a crime.  Even though we didn’t like the turkey breast, we concluded that every distasteful event can be reconciled with mashed potatoes and pecan pie.  Hooray for pie!

Speaking of turkeys, the wild ones that the Sheriff has been hunting seemed to all disappear the week of Thanksgiving.  Strangely, they showed back up in the corral today.  They must know Thanksgiving is over and we are sick of turkey. We are done with leftovers and having spaghetti tonight with a sauce made from tomatoes from this summer’s garden. 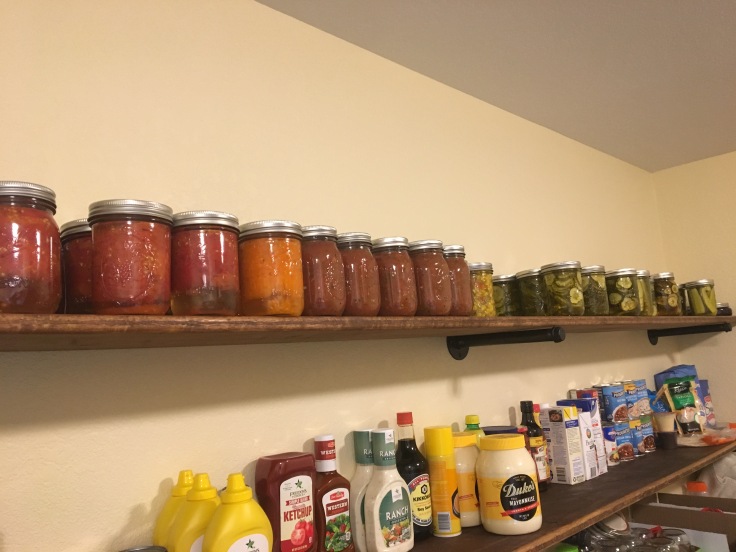 On Black Friday, we scrambled to disassemble our corral and set up a giant stall inside the barn so the cows could have shelter from the oncoming blizzard. One day we will have more permanent structures in place so we won’t have to do this, but the ranch projects are all ongoing and the permanent stall build is definitely up there on the list.  Meanwhile, we worked all morning in anticipation of the “blizzard”.

We went to let all the cows into the corral area and as they walked past the open barn door, #112 who we call the “Dirty Dozen”  turned her head and looked inside the new stall.  It was as if a lightbulb came on in her head and she stopped and turned and stuck her head in the door.  Then she mooed over her shoulder as if to say, “Hey girls!  I mean, HAY girls!  Come check out the new digs!”  With that, she went into the big stall and all the other cows immediately followed her.  They all just hung around inside and decided that this was going to make a fantastic new bedroom.  It also was conveniently a fantastic new bathroom!

Dave and I were super happy that if they needed it, the cows could use the barn as shelter and that’s exactly what they did.  I went out after dark during the beginning of the snow and wind, and they were all inside enjoying their new hotel room.  We are calling it the Taj Ma Holler.

We seemed to have survived the great Thanksgiving Blizzard of 2019 and while it is about to set, the sun is shining brightly and it is really beautiful outside. It seems quite appropriate that as we roll into December the Holler looks just like a Christmas Card.

2 thoughts on “The First and Last Day of November”