Autumn harvest season has arrived.  We have been busy on the Holler putting things up.  First we put up the hay.

Then we had about a million cucumbers so we put up pickles.

The bees really went to town this summer and we have been spending several days harvesting and putting up honey.

Now, it is starting to get a little cold in the evenings, but the tomatoes are coming in like crazy.  Every day for the last week I have picked about 15 tomatoes, and it looks like there will be at least 3-4 more days of picking that many.

Dave and I made salsa.

We canned and put up more tomatoes. After finally getting the tomatoes canned I found the most amazing thing on the counter in the spot where they had all been sitting.  Counter space!  I hardly recognized my own kitchen.

Nothing tastes better than a late summer tomato.  We have been eating so many tomato sandwiches it’s kind of getting old.

Dave has given me a new nick-name:  The Mater Queen of So. Dak.  I think this enormous tomato would have won a prize at the state fair, so I’ll embrace the new title.

We have done so much canning this year that we decided if we get snowed in this winter we will probably not bother plowing out.  Instead we will stay in and eat pickles, tomatoes and honey.

We have also been gathering firewood.  Here is the pile that we will split and stack that we hope will keep us warm for a few nights…ha ha.

Another fall task has been putting up the haying equipment for the winter.  Dave and I spent quite a bit of time reorganizing the barn lot and Dave did a lot of greasing and maintaining on the mower, baler, rake etc.  We think the barnyard cleaned up pretty nice.

And finally, we have been entertained mornings and evenings with tons of elk.  In past years, we have heard and seen a few herds, especially in the fall rut.  This year, the elk have decided that our south pasture is the best new nightclub in South Dakota.  Nearly every evening, right around sundown, the bugling begins.  In the low light, you can only make out the giant forms of the herd in the distance, but you can hear them bugle and snort.  It continues late into the wee hours of the morning and tapers off around 3AM.  Then, right before sunup, the bugling begins again and we get a good look at the herd.

We also get a good look at whatever damage they have done to our trees. 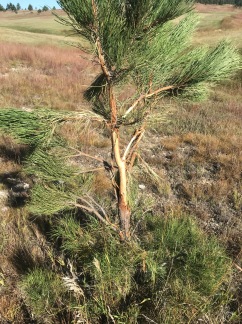 Elk have been scraping on the poor little trees 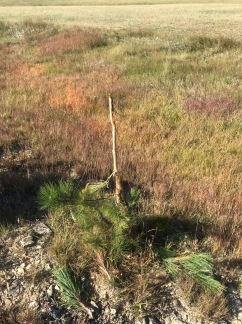 This guy didn’t stand a chance 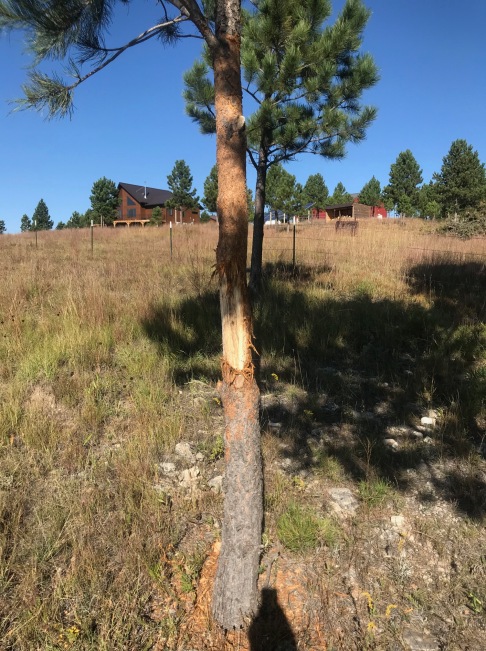 Scrapes about 8 feet in the air.

I wonder who was responsible for the death of these trees?

This morning, there were about 25 cows and at least one big bull shutting down the south pasture night club.  They decided to head east and jump the barbed wire fence.  As they ran it sounded like a herd of horses running, except the rhythm of their hoof-falls was a little different than horses. How can I explain this in writing?  I’ll try by explaining that running horses sound like the beat of the William Tell Overture or the Lone Ranger theme song.

The elk sound more like a car on a bumpy road.

Okay, if you read that out loud you may  get the idea.  I wouldn’t recommend reading it out loud if you’re at work or somewhere in public.  You might get some strange looks. Back to this morning, we saw the elk start running east and heard their trampling feet:

One by one they began to jump the barbed wire fence and then we heard:

Dave and I looked at each other over our coffee cups and he said, “I guess we’ll be fixing fence today.”  Never a dull moment out here on the Holler

That’s about it for this time.  We are working outside today, enjoying the unusually warm autumn weather. We are hoping for a long, mild autumn, but in reality we could be less than 1 week from the first snow flying.  We better get out there and split that firewood!