Hey out there!  We’re still alive, but we have been working outside all summer and that hasn’t left much time for blogging.  I will try to do better but the amount of work we still have to complete before the snow flies is a little overwhelming.  We keep trying to get all of our hay cut and baled and loaded.  It has been hot and rainy (unusual for here) so the hay keeps growing and rain daily means it has been too wet to cut.  When we get two dry days in a row, we mow the hay, and then it rains again so we have to let it dry another day before we rake and bale.

We are slowly getting through the haying season, but it just doesn’t want to end.  We still have the north pastures to mow and bale, and our neighbor’s yard.  Then, it looks like we might get a second cut in some of the southern pastures!  Meanwhile, the hay loft is slowly filling up with hay.

To make our lives easier, we stack bales on pallets and let the tractor do the work lifting it into the loft.  We use a pallet jack in the loft to position the pallets of hay.  Over 1000 bales of hay moved so far this summer and possibly another few hundred to go has led Dave and me to believe we need to invest in a round baler. This point was not so subtly emphasized by our UPS driver who said to me, “You’re still picking up those idiot cubes?”  His point was that square bales are a pain, and while in small quantities they are useful, picking them up and stacking them is a lot of work. Anyone out there got a round baler for sale?

In the midst of haying season, I abandoned the ranch and went to the Grand Canyon to pursue a bucket list trip with my brother, Scott.  We hiked the whole canyon, north rim to the south rim in two days.  It was 24 miles of incomparable beauty and stifling hot temperatures.  As one hiker said, “Both God and the Devil live in the canyon.”

Getting started before dark

Hiking down the North Rim

Crossing at the bottom

It was a great trip and while Scott and I were both worn out at the end, it was an incredible journey and we had a great time.  We ended up sore and tired but thankfully neither of us suffered from any blisters, heat exhaustion or any other injuries.

The canyon was great, but I was ready to get back to the Holler and to my favorite rancher and of course, the Sheriff.  We were back at work the next day picking up hay bales.

Summer is coming to a rapid close and we still have a lot to do, including finishing the hay.  We are also trying to get in a new fence around the paddock.  We haven’t even begun to gather firewood.  Meanwhile, the garden is producing lots of goodies, and Dave and I canned 20 jars of pickles this week. Don’t worry, we won’t eat them all but they usually go into goodie baskets for guests and family. 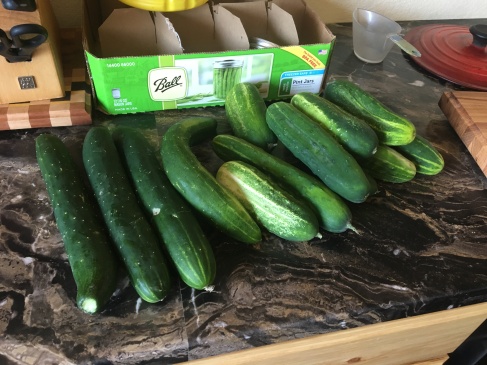 Soon the tomatoes should be ready for canning. Like last year , the peppers didn’t do so good, but I still plan on canning some salsa. The bees are going gangbusters and we should be harvesting Hoten Holler Honey in the next few weeks.

The calves are getting huge and after the hay is up, it won’t be long before they get weaned off of their mothers.  The bull has been in with the cows since mid-July and we are hoping he has been doing his duties.  It appears he is a little worn out, too.

Tonight, it is raining again which means we won’t be able to do anything with hay until mid day tomorrow at the earliest.  Dave and I are watching the storms roll in and Sheriff Joe is passed out on the floor after a long day of chasing butterflies.  Life is good on the ranch.