It has really greened up on the Holler since my last post.

The calfies are getting BIG!  Especially the ones that were born in early April.

And here is the newest edition to the herd.  Smudge had a cute little bull and Linda is calling him June Bug.

Our calves are spread too far out in age to hold a single roundup, so we elected to drive the first 10 to the vet for branding, castrations and inoculations.  We had already moved the herd to the pasture we call the “Hide Out”  so we had to drive them back to the High Lonesome where we have the ability to separate and load the calves.

Our herd is pretty gentle and we really didn’t have much trouble doing this.  Rancher Dave and Cowboy Dave took the babies to the vet and Linda and I stayed behind listening to the Mamas pitch a fit for about 3 hours.  They did NOT want to lose track of their babies.

The vets did a great job, and the two Daves did the branding.

They all reunited later that afternoon as Cowboy Dave and Rancher Dave drove the trailer of babies back to the hideout.  The moms heard their babies mooing and ran after the trailer back into that pasture. 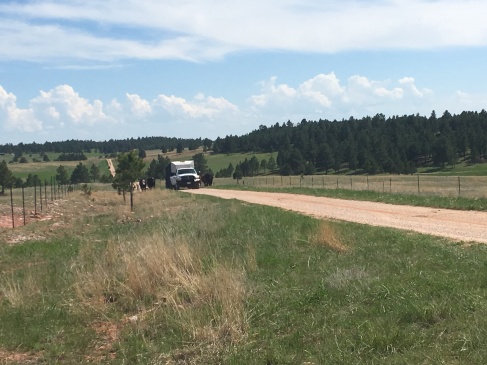 Leading the moms up the road

“Let our babies out!” 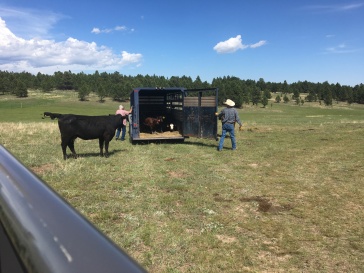 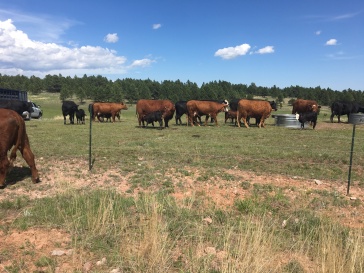 Other than moving cows around too many times, we have been busy working on farm equipment and keeping up with the landscaping.  At the last post we had nearly a foot of snow, but here we are the 2nd week of June and we have already mowed the lawn twice in one week!

The garden is planted (VERY LATE) and we are hoping that there is still season enough left to get some good tomatoes and peppers.  It’s pretty cool still, so the lettuce seems to be doing the best so far.  I’ve also got some flowers going in this cool planter Dave built for me.

The bees don’t seem to be thriving like they were at this time last year.  There are plenty of wildflowers for them to visit, but when I opened the hive, there were just not that many bees in there.  I don’t hold high hopes for a lot of honey this year, but the things I don’t know about bees could fill up the Grand Canyon.

And so it goes, the spring is almost gone and we will be cutting oats in the very near future.  Then we will be baling and stacking hay.  By the way, we got the hay loft in the barn completed.

And before I go, I wanted to write a blog on D-Day, but we were busy and it didn’t get done.  Let me just say how grateful I am to be an American and for my freedom.  Thank you to all the veterans, and especially to those brave men that stormed Normandy 75 years ago.  The only thing we can say is Thank You.