It Ain’t Over Yet

Hey out there!  It’s Throw-back Tuesday.  Here’s a picture of winter on the Holler.

Oh wait, that picture is from today.  That’s right.  We are in the middle of a late spring blizzard.  We already have eight inches of snow on the ground and are forecast to get at least eight more tonight.  Winter just won’t quit. We did have a little taste of spring last week with a few days in the upper 70s and low 80s.  Stupidly, I washed and put away all of our winter gear.  Mother Nature must have taken this as a taunt and now I’m paying for it.

But that is just how it goes.  Mountain weather in the springtime.  Meanwhile, the cows are still requiring hay because they can’t forage through all this white stuff.  The woodshed is definitely a lot more empty than we expected it to be by now.  Also, I am praying the one remaining beehive survives this bout of cold and moisture.  The moisture should be very good for all the oats we planted, though.

Since I last wrote, two more calves have been born.  Puzzle had her baby, a bull named Riddle. And of course, in the middle of the snow storm yesterday Freida decided to calf.  She also had a bull named Freddy Prinze.  Unfortunately I haven’t been able to get a good picture of either of them yet because the Moms have been hiding out from the snow storm.

One warm day last week I went for a hike down Sunday Gulch near Sylvan Lake.  I had read on a trail review that it was rated “difficult” and I assumed that meant it was really steep.  I was up for the challenge but now realize now that “difficult” means very rocky with lots of streams to cross and boulders to climb. 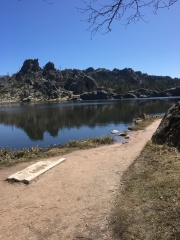 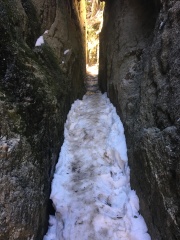 A snow bank in the tunnel 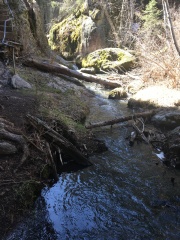 A stream to cross 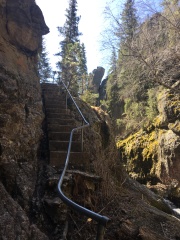 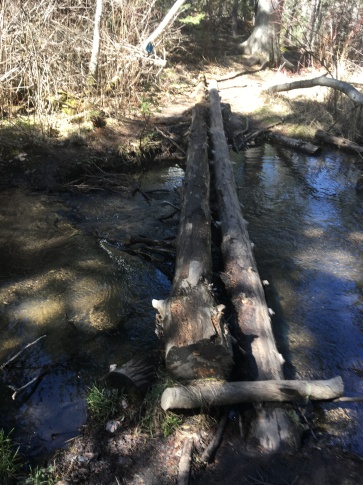 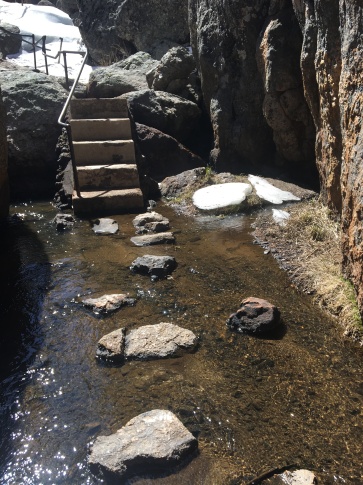 Add a lot of melting snow and running water to these obstacles and it made for a really adventurous hike. The trail is a big loop with the two trailheads beginning at the lake.  I hiked it in a clockwise direction and I didn’t see a soul until I neared the end back at the lake.  When I got to the trail end which would have been the counter-clockwise trailhead, I had to climb under a barrier that said, “TRAIL CLOSED”.  That’s me, the accidental rebel.

Today, Rancher Dave, Sheriff Joe and I are holed up in the house watching the snow.  We’ll venture out a few times to check on cows and to fill up the wood tote so we can keep the stove going.  Fortunately, the days are getting really long so our solar power is doing great.  We had to scrape snow off of the panels this morning, but it is not cold enough for the snow to stick to them now so we aren’t worried about power.

Coming up, we are looking forward to some warmer weather and a chance to get back to work.  We have to do some mower repairs, some corral repairs to get ready for round-up, and before you know it we will be cutting and baling hay. I’m just hoping we don’t have to shovel snow off of it first!