It has been an incredible November here in South Dakota. We have had several days in a row that were almost 50 degrees, and if the forecast is correct, we are expecting 50’s next week as well! Today, we woke up to a little dusting of snow and temperatures in the low teens, but we cannot complain as the wood stove is cranking and the house is warm. Also, we have been working outside a lot, taking advantage of the warm weather and are grateful for an “indoor day” to get caught up on other projects.

We have been working on cleaning, fixing, and prepping some of the haying equipment for winter storage. This year, all of the machinery can fit in the barn and that really extends the life of all things mechanical. Dave had to pull out the old mower blade, and that took several hours of pushing and pulling. He was not deterred.

I worked on cleaning up an old calf table. It was pretty worn and rusty so I thought I would spray paint it with Rustoleum. This was not a good idea considering the gusty winds. I went through a can of paint in about 5 minutes. Instead, I found some of the rust-proof paint we used to paint the trailer last summer and that worked out pretty nicely.

This calf table is missing one of the handles, but if we can rig one up, we will be all set for round up next year and we won’t have to borrow one. If the bull did his duties and all goes well, we will be expecting seven calves in April, and Cowboy and Linda will also be expecting six in April. Muzzle should be delivering in July again this year since she got off cycle somehow last year. So the roundup will be twice as big as last year. Any volunteers are welcome!

Dave was going to teach me to change the oil in the generator that is the backup for our solar power. It runs a test cycle every week and we have used it off and on when we have a run of cloudy days that aren’t solar-power friendly. As we began to take everything apart, Cowboy Dave and his dogs showed up in the southern pasture in his Kawasaki Mule. Joey decided that it looked like they were having more fun than Dave and I changing the oil and so he scooted off through the barbed wire across the field and up the hill to join the party. I don’t want him running off, even if it is just to see his friends, so I went through the gate, across the field and up the hill to get him and scold him. By the time we returned to the generator, Dave had changed the oil. Jen’s training: incomplete.

It was also time to change the oil in our Mule, so we did that on one of the warm days as well.

We have been waiting for some moisture in the forecast so we can put down nitrogen for fertilizer. We have had the broadcaster on Babe all month, but we just haven’t had the right weather to fertilize yet, so we took the broadcaster off the tractor so we could move the mower Then, we put the broadcaster back on Babe so we will be ready to go when the weather dictates. We also helped Cowboy Dave put his snowblower on his tractor, Bob, likely ensuring we won’t have any significant snow all winter, right?

Putting implements on tractors and taking them off is not a huge deal, but it does take some time, depending on how many connections, cotter pins, etc. are involved.  It requires some teamwork and coordination and our overall operations are improving. We are hoping all the equipment is good to go for winter, now. It is a lot easier doing some of these outdoor tasks when it is sunny and 50 than when it is snowing and 10 degrees.  Dave was happy that even though it was in the low teens this morning, Babe, the tractor, started right up in the barn. He got to work picking up some of the slash we have been dragging near the stock dam. 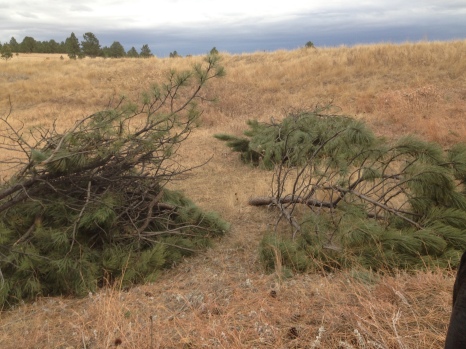 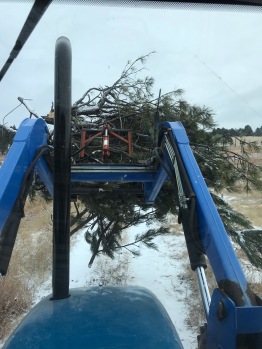 It is our 3rd November here in South Dakota, and really only the 2nd of having somewhat of a normal existence as ranchers since we were in the camper the 1st year. The rhythm of the seasons is starting to feel more comfortable. We are feeling much more prepared for winter than last year and definitely more than the first year we were out here. This blog is starting to get a little routine, more chasing cows, dragging slash, fixing equipment, stacking wood etc. Still, I really enjoy documenting our life here. If you would have told us ten years ago what we would be doing we would have said you were crazy. It turns out that we have never felt more at home. We have a lot to be thankful for.