Fickle February!  One day the sun is shining and it feels positively spring-like.  The next it snows, and the wind blows, and you cannot imagine feeling any colder.  Monday was one of those really cold days.  The wind chill was MINUS 18 and it was snowing sideways. The wind was howling out of the east and it blew all the snow in South Dakota across Stagecoach Springs.  Fortunately, Dave hooked up a heater to Babe, the tractor, and was able to get the road open.  We needed to get out because we had promised one of our neighbors across the way that we would help him feed his 200+ head of cattle.  And even when it is cold out, cows gotta eat! 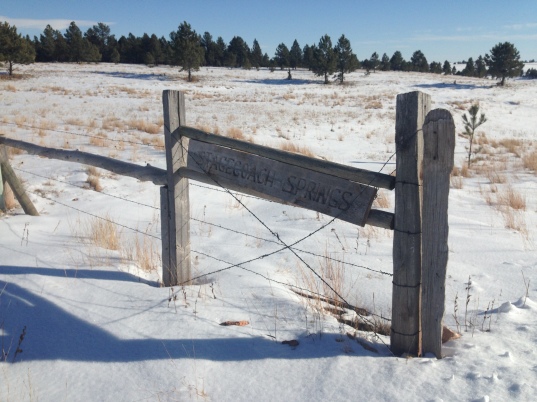 Our friends Ned and Doris normally have some help but the help had other obligations this week and Ned asked if we might be able to lend a hand.  We headed over to the Spring Valley Ranch where Ned had a flatbed truck loaded with six giant 900lb round hay bales.

He also had two giant Case tractors ready to go.  One tractor, that is not four-wheel drive, was pulling a processor.  For those of you who don’t know, a processor is a big piece of machinery that you put a giant hay bale into, and it grinds it up and spits it out in neat little rows so the cows can easily access it.

The other tractor, which is a four-wheel drive beast, was used for unloading bales off of the flatbed and onto the processor.  Pilot Dave drove this tractor.  I drove the smaller flatbed truck which had another giant bale on it and was used to feed Ned’s horses.

We lined up our convoy and headed out to find the herd.

They were waiting and hungry, and the process went as follows.

First, a giant bale was unloaded from the flatbed.  Dave and I cut the strings of twine off of the bale, which is not as easy as it sounds because the bales have been sitting in snow and the strings are frozen into the hay.  You really have to get in there with your knife and stab at the strings and hay like you are a crazed serial killer.   Then you pull as hard as you can to get the strings out from under the frost and ice.  After fighting with the strings and the ice, we have decided to invent edible bale string and let the cows take care of it.  Maybe some long Twizzlers would work although I doubt anyone would let us try to load a spool of Twizzlers into their baler. I bet the cows wouldn’t complain.

Dave fixin’ to cut strings on the big bales

This one is ready to be processed….the bale, not Dave!

Meanwhile, Ned took the big Case tractor with the loader and plowed a long section of pasture so he had a place that was fairly clear of snow to feed. Next the giant string-free bale was loaded into the processor and was processed and delivered to the cows.

Hay processed in a row

The buffet table, cows in the background 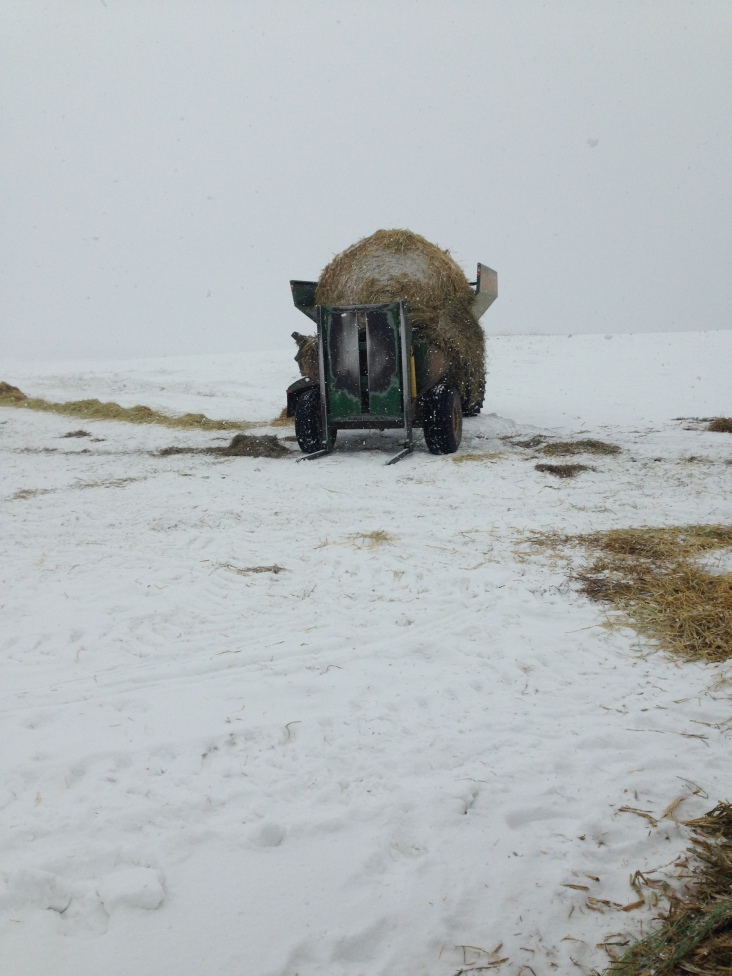 The processor processing the hay

During the entire process, the curious and hungry cows were constantly surrounding us and trying to get their noses into whichever bale we were working on. Not to mention, the wind was howling out of the east and the sky was spitting cold ice pellets and snow.  This was just another glamorous day in ranching life.  As hard as it may be to believe, when you start working you almost completely forget how cold it is!

Then we repeated the process until all the bales were shredded and all the cows were eating in a row. We took the final bale up to the horses.

After feeding, we headed back to the ranch, and struggled a bit getting the tractors and truck up the steep hill.  Eventually, Ned plowed a little track around the hill so we could get all the equipment back to the barn.

Doris  cooked us up some chicken and wild rice soup for lunch and it was so nice sitting in the warm house after the cold morning feeding, which had taken about three hours.

When we got back to Hoten Holler, the wind had shifted and now all the snow had drifted in from the west side of the road.  Dave and Babe headed back out to clear the road again.

That night, Dave and I were discussing cattle operations.  200 cows is a lot and feeding them is quite the process.  They also go through a ton of water.  We laughed about our little operation feeding square bales off the back of the Mule.  When calving starts in a few weeks, we are anticipating 8 calves, while Ned has had 18 delivered in one evening!  Ranching takes some work, especially on that scale.  Still, it is really quite fun and it keeps people young.  Ned and Doris are in their 80’s and they are outside working cattle, hopping in and out of tractors, running water, and ranching every day.  I hope that if I get to live to be in my 80’s that people will say, “That’s a lot of work, especially for someone your age!”  But I probably won’t be able to hear them, anyway.

We helped the neighbors all week, but we didn’t neglect our girls over at the High Lonesome.  They are all looking fat and happy. 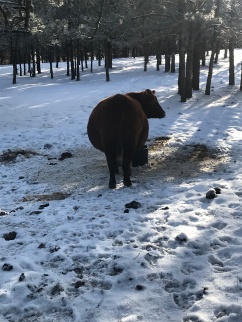 We are expecting calves in about 30 days now.  We are also expecting a foot of snow this weekend so we hope that no one decides to give birth early.  Happy February, everyone!