Dave and I got to witness something on Friday that I doubt you can see anywhere else in the world.  A real-live buffalo roundup! We got up pretty early and drove through Wind Cave National Park as the sun came up.  We were quite pleased that there was not very much traffic, but as we crossed into Custer State Park, we turned a corner and all we could see were miles and miles of tail lights!

We were expecting a crowd, as Custer State Park’s annual Buffalo Round-Up hosts up to 20,000 people each year.  Our town, Custer, has a population of 1,860, so that is quite an influx of traffic! Still, everyone was in a fantastic mood and people were polite, allowing others to merge and not throwing any big-city road rage fits.  We finally arrived to our parking destination and hiked probably a quarter mile to the north viewing area.  There were quite a few people in the north viewing area and we were directly facing the south viewing area where the crowd was equally as large.  The gate to the buffalo corrals was directly between the two viewing spots.

So we waited, anticipating buffalo between 9:30 and 10 AM.  At around 10:15 someone in the crowd spotted a herd of something on a faraway hilltop.  But it wasn’t buffalo, it was the wild burros that live in the park and they appeared to be looking down at the large crowds saying, “What’s all this about?”

“What a bunch of jack-asses!”  Dave joked, and I responded that was probably what the burros were thinking.

Suddenly the southern viewing area began cheering and from the north we could see the beginning of the giant herd (1000 head in all) cresting a hill and running down to the valley directly in front of us.  Horseback cowboys and several trucks pushed them down the hill and toward the corral gates.

It was awesome.  The sound of the buffalo running, the crack of the whips from the cowboys, and the cheering crowd made for a very exciting morning.

After the roundup, guests are given the opportunity to go down to the corrals and watch the buffalo be “worked.”  They are given their inoculations, and they separate the oldies and the sickies for auction.  The herd is managed to be sustainable within the park and that means once a year they  cull it for the healthiest population.

We opted out of this part because we just wanted to get away from all the people!  It took us about 45 minutes to get out of the parking lot due to traffic and we were routed north through the city of Custer to get home.  On the way we passed the State Game Lodge, which used to be the “Summer Whitehouse” for Calvin Coolidge.  They were hosting an enormous Arts Fair themed for the round up.  It looked pretty cool, but again, we had reached our crowd quota for the day so we drove on home.

Saturday, we decided we had goofed off enough on Friday and we better get back to work.  We tackled a stand of trees in the northern-most pasture.  Dave limbed all the trees and I started dragging slash and stacking firewood.  Then Cowboy Dave and Linda showed up as reinforcements and made the work go much faster. Of course we were being cheered on by Hercules and Arrow.

Chainsaw Dave took out the limbs, Linda and I drug the slash into piles, and Cowboy Dave picked up those piles using the grapple attachment on his tractor.  He moved the little piles into two big piles and we will burn them once we have snow on the ground and get the required burn permit. 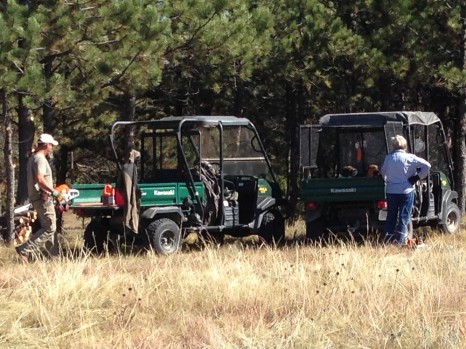 Two mules for transportation to and from the work area 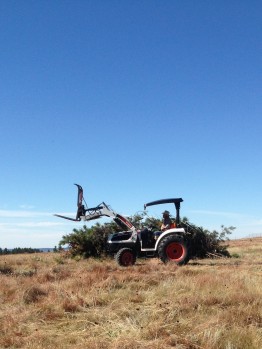 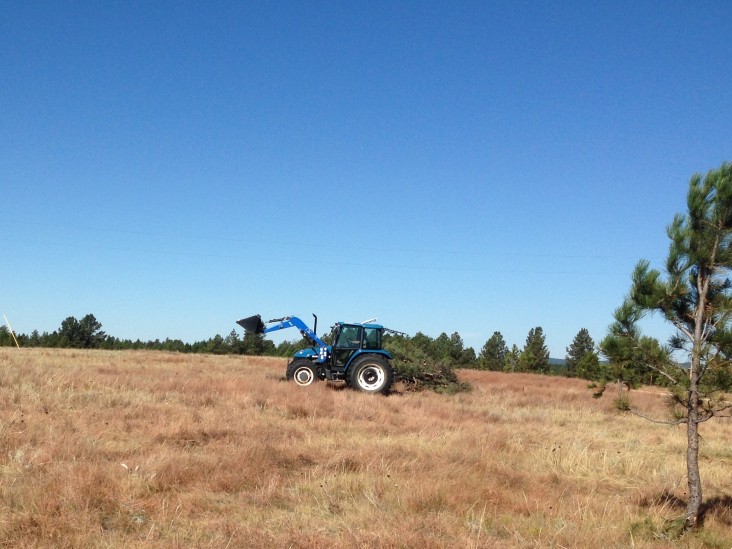 Pilot Dave in Babe squishing down the piles

Chainsaw Dave wanted to get some of the higher-up limbs on several trees so we did the old redneck trick of putting him on the tractor forks and hoisting him up with the chainsaw in tow.  Probably not the smartest move, but we went slow and it all turned out well.

After we cleared the area, we thought it looked pretty nice.  We were grateful to our helpful neighbors and went down to their ranch, the High Lonesome, and brought some Keystone Light.  Typical paybacks for farm labor in these parts.

So today, Sunday, Dave and I were playing tourist again.  We went to the annual Crazy Horse Volksmarch.  The weather was quite iffy this morning, and there were dark and menacing clouds rolling in from the west.  We decided we were going to go for it anyway and drove up to the parking lot for the monument and prepared to hike the 6.2 mile round trip up to the face and back.  About 30 minutes into our hike, the sun came out and we enjoyed a beautiful fall day.

We made it to the top, no problems, although we will both probably be a little sore tomorrow. The top of the monument is about 6500’ and the last part of the hike was pretty steep! 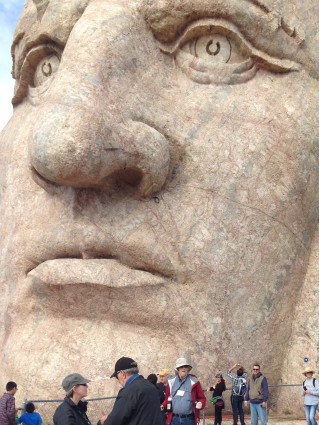 Can you find Dave? 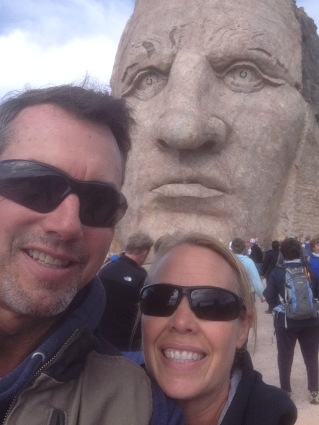 View from the top

The trip down was much faster.  We poked around in the museum for just a little while and then headed back to the Holler.  It is “hotdog Sunday” after all and we were ready to eat after all that hiking and fresh air.

All of the activities this weekend put a nice little punctuation mark at the end of summer and tourist season around these parts.  Typically, we can expect a little snow in the beginning of October and I see it in the ten-day forecast.  That means our outdoor projects will be completed as weather permits.

We both commented today how much we like the change of seasons.  This year, we are really grateful to not be looking down the barrel at winter from the inside of the camper.  Instead, we are enjoying the cooling evening temps with a warm fire going in the wood stove.

Country Living, Neighbors, What to do in Custer

One thought on “The Perfect South Dakota Weekend”