And Then There Were Five

Dave is feeling really good and almost 100% himself.  Thanks to everyone for the phone calls and emails, we appreciate it.  It’s difficult for him to stay in low gear but he still needs to take it easy for 3 more weeks so his internal stitches don’t come apart.  They will dissolve on their own, but meanwhile he isn’t supposed to lift anything heavy or do anything too strenuous.  We have been keeping busy with typical household chores, some gardening and light yardwork.

Our neighbor, Shari, had to work on Monday evening.  It has been really hot so she asked us if we could make sure her cows had enough water between 7PM and 8PM.  We were happy to do this, although we went over to her pasture around 6:30 thinking this wouldn’t affect the cow schedule.  The stock tanks were nearly full so we proceeded to top them off with the hose.

At 7PM on the dot, her cows came running from the eastern pasture, through the underpass of the road, and right up to the stock tanks.  They pushed and shoved each other to get a good spot at the bar and in about ten minutes both tanks were nearly empty.  So, we stood there with the hose and tried to keep up with the water demand from the thirsty girls! 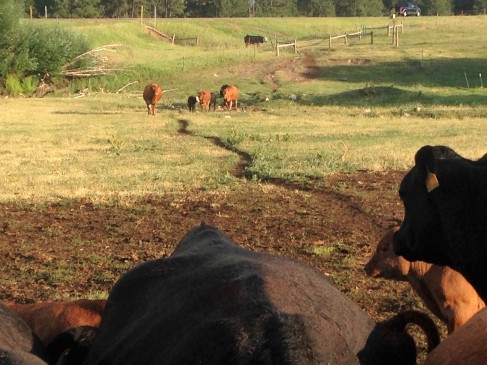 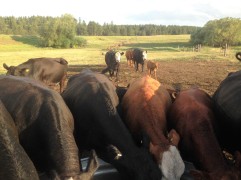 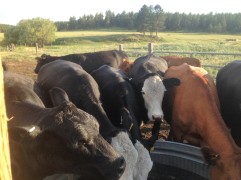 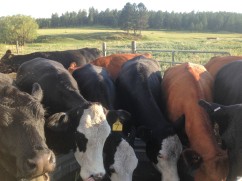 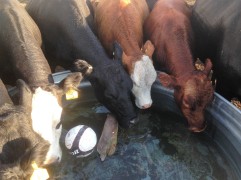 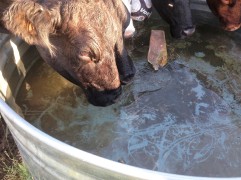 At about 7:45 we had refilled both tanks and the cows had their fill and wandered back through the underpass and off into the other pasture.  We got in the truck and drove home.

When we pulled into our drive, Dave looked down the hill at the back yard and said, “What is that?!?”

There was an enormous hawk, really about the size of a standard laundry basket, hunched over beside the garden on top of a huge pile of black and gold feathers.  The hawk was eating our chicken, Sabrina.  Dave ran for the gun and I ran to see if she was still alive.  The hawk flew off and Sabrina was dead.  It looked like he got her just before we got home.  From all I’ve read the merciful thing is a hawk will kill its prey pretty quickly.

I looked in the coop and there were no chickens.  Dave and I proceeded to search and he found Farrah Fawcett under a small tree not far from the murder scene.  I found the four other chickens in a bush about 30 yards away on the other side of the fence.  They were terrified and I thought they were all dead because they wouldn’t move until I picked them up and set them on their feet.  They all ran back to the coop and up into their house.

Dave and I are kicking ourselves because we knew the risks of free-ranging here in the country.  We just got cocky and we left them out while we were not here. Nearly everyone we know that has kept chickens has lost a few to predators, even those that keep theirs cooped up have lost a bird or two.  The poor chickens really are defenseless to hawks, owls, coyotes, foxes, etc.

The best solution we could come up with is to move the coop closer to some trees for more cover and to only let them free range when we are close by.

Regarding the hawk, neighbors and family both say, “He will be back!” In fact, he was sitting next to the garden the next morning but flew off as soon as we opened the back door.  I guess he thinks we are KFC or something now.  He’s welcome to come back.  We are ready for him this time.

On a lighter note, the garden is doing great.  We have been eating and giving away lettuce and spinach.  The turnips are delicious and we already have harvested a few banana peppers. 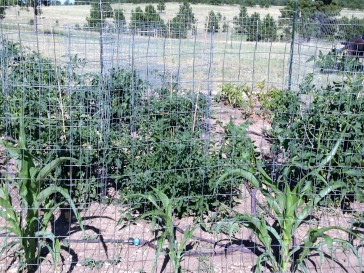 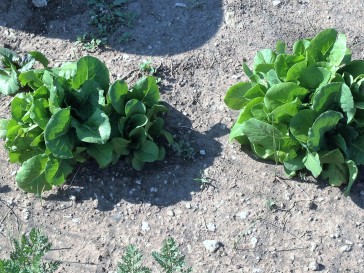 Lettuce, Anyone? We’ve had enough!

The potatoes looked pretty good but the yield was, well, small potatoes.  Each plant had a maximum of ONE potato, and some had none.  Plant a potato, get one potato?  Hmmmm….

The tomatoes are looking good so far, but you never know if they will get bugs or rot.  We’re hoping for a bumper crop to make salsa, tomato sauce, and of course BLTs!

The beets, corn, and cucumbers don’t look too bad either. 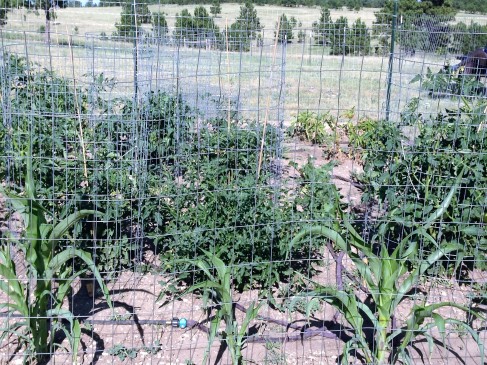 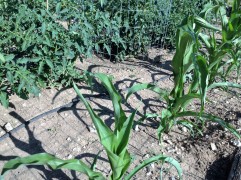 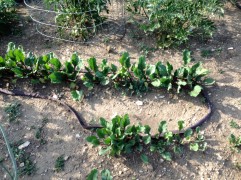 We will do some planting of more potatoes in the next few weeks, as well as some lettuce, spinach, and turnips in hopes of a late fall harvest.

That’s all on this end for now.  Hopefully everyone is enjoying the summer and keeping an eye on their flocks!

8 thoughts on “And Then There Were Five”