The last week is a blur, not because of St. Patty’s Day drinking but because we have been super busy! We have been searching for a tractor so we can plant some cover crop and possibly hay or alfalfa this summer, and so we can contribute to the snow removal effort as needed this spring. Also, there are about a million things you can use a tractor for that are much more labor intensive without one.

Last week my Dad called and said, “Are you still looking for a tractor? I found you one.” And thus begins the Great Iowa Blue Tractor Reconnaissance Expedition. After speaking to the owner and getting the full details, we decided it was worth our effort to drive to Iowa to look at the tractor. Also, it was a great excuse to get to visit my parents and my brother.

Wednesday, we left the holler at about 7AM which felt a lot earlier, thankyou daylight savings time. We decided instead of driving the interstate we would take the shorter but slower Highway 20 through Nebraska. This was a great idea because there was almost no traffic and the scenery was spectacular.

We saw deer, antelope, ducks, swans, and the beautiful open spaces of the Nebraska Sandhills. The wide-open skies and lack of civilization (and cell phone service) made for a really peaceful road trip. There are many small cowboy towns along the way and it almost felt like a trip back in time to an America that existed 50 years ago.

We finally got to Iowa and had dinner with my family and crashed for the evening. The next morning, we hopped in the truck and drove to Dunlap to see the tractor. 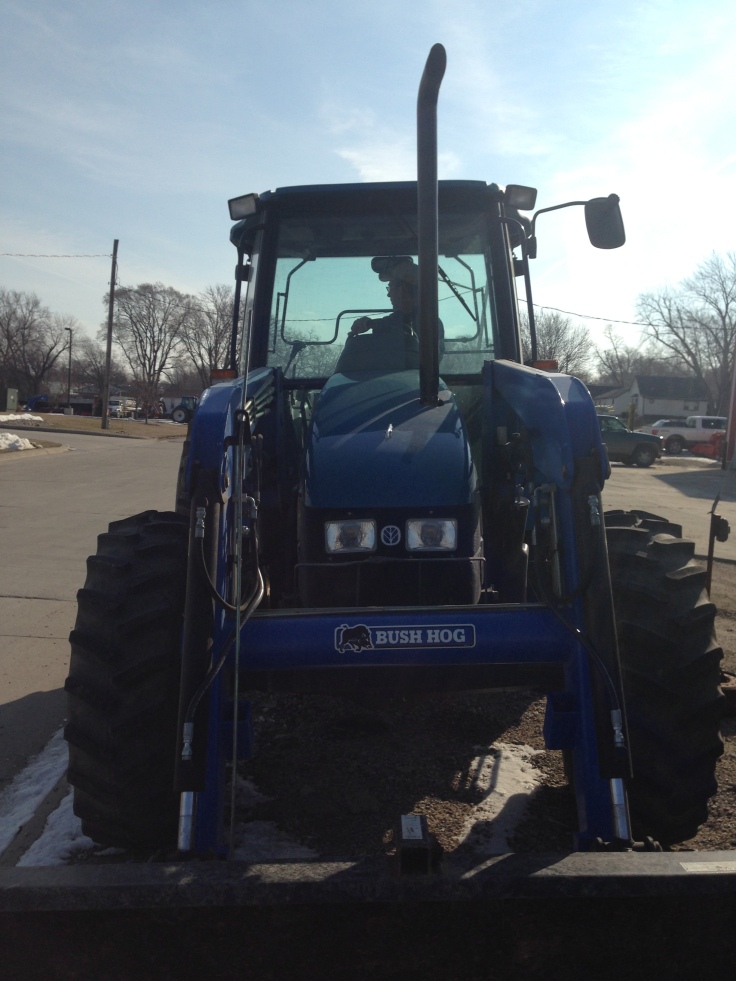 This is an awesome four-wheel drive New Holland. While it is a 1996 model it appeared to be in pretty good condition and didn’t have a ton of hours. Dave drove it around and put it through all the gears. The price was right so we made an offer (which included delivery to South Dakota!) and came to an agreement. The owner was ready to sell and said he could put it on his trailer and haul it up for us on the weekend.

We spent the rest of the Iowa trip hanging out with my family and eating too much. I suppose everyone eats too much when they travel home. It was great to see them but the visit was too short.

The next day we loaded up in the truck again and headed back to the holler. We took the same route and we will probably never take I-90 again. This time we were treated to the same beautiful scenery but were also lucky to see a real-life cattle round up. There were about eight cowboys on horses driving a large herd up and over the ridge and you could see it all from the highway. Spectacular.

When we arrived back at Hoten Holler, we were pretty tired but our good friends Cowboy Dave and Linda said to come over for corn beef and cabbage….it was St. Patty’s Day after all. They wanted to hear about the trip, the tractor, and drink some green beer! 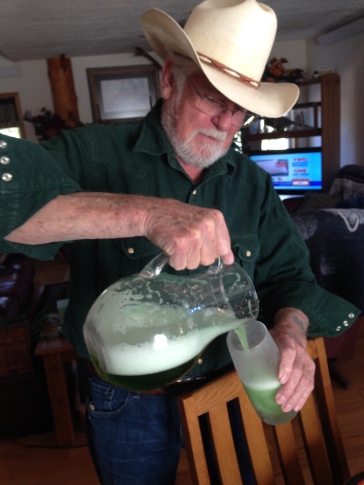 Dinner was great and we were relaxing and drinking our beer when Pilot Dave said, “Look out the window!” Now this is never an unusual dinner time comment because often there are blue birds, deer, or spectacular sunsets to see out the window. This time, however, we were quite surprised to see Cowboy and Linda’s cows had escaped their pasture and were running around in the yard. We could see a few of them hanging right outside the window and the calfies were skipping and jumping down the driveway.

We all scrambled in four directions, Cowboy Dave ran to the driveway gate, Linda ran to the Northwest corner to prevent that escape route. I ran to the Northeast corner to do the same and Pilot Dave ran to the barn to grab the cow-cake. Cowboy Dave was able to block all but 2 cows from going down the driveway, of course one was Frosty! Then Pilot Dave began shaking the coffee can full of cow-cake and all the cows went running back to the pasture and followed him in. He was like St. Patrick getting the snakes to follow him out of Ireland. Even Frosty and the other escapee decided they couldn’t pass on cake, although Cowboy Dave was giving them a little pressure to get moving back to the pasture as well.

It was a really good St. Patty’s Day party, stampede and all! Linda said, “Reef, that was so smart of you to grab that cake! Good job!” Pilot Dave has become a lot more proficient with the cows this year, and now that he owns a tractor I may have to start calling him something besides “Pilot Dave.”

Back to the tractor. It was delivered on Saturday morning and Pilot Dave, or Farmer Dave, or Tractor Dave, or Reef…..anyway, you know who put it right to work picking up and scraping rocks out of what will eventually be our lawn. 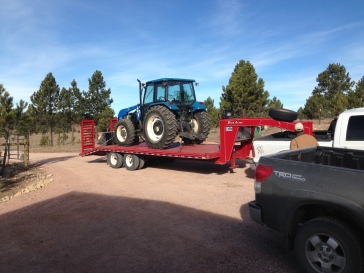 Then I got a lesson in driving. I need a “Student Driver” bumper sticker.

We decided to name the tractor Babe, after Paul Bunyan’s BABE the BLUE OX.