A Minor Change in Plans

We had planned to put an outbuilding/carport to park the camper in so we could survive the harsh winter winds and snows – at least until we can move into the house.  We were expecting to put it in the area which we put down gravel and leveled and cleared out all the rocks.  The building was supposed to be here two weeks ago, but the company called at 4:30 PM on a Friday afternoon and left a message to let us know it wouldn’t be here until this Thursday.  We called back and of course they were gone for the evening.  That Monday we called and said “Why the delay?”  They said, it looks like your scheduled building install date has been pushed back.  Quite helpful, huh?

We figured we would just wait until this week as we were really left with no other choice.  Thursday morning arrived and they had said they would be here between 7AM and noon.  At 11:30 they called and said, “Sorry, they aren’t going to make it there today.”  Dave told them to give us a refund and after some hemming and hawing and a promise for a discount, and that they would be here on Friday morning we agreed to give them one more try.

Well, they showed up Friday morning and said, “We cannot put a building here because it is too rocky.”  They did not have the equipment to drill holes for cement anchors and tried to talk us into using cheap rock anchors but with no guarantee of wind limits. Long story long, we told them never mind.  At this point we are kind of hosed as far as putting in a building.  All the local builders require 10-12 weeks to schedule an outbuilding – the same amount of time we waited for this nonexistent one – so we might as hunker down until the house is finished.

All of this drama led us to the conclusion that we should at least move the camper into the leveled-out spot which we had cleared.  At least the rock shelf will give us a windbreak and we will be out of the dirt/dust bowl. 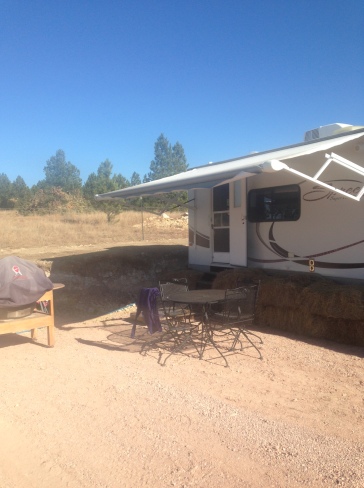 We packed up all the breakable stuff and took it out of the camper, and then hooked up to Truck Norris and dragged Happy Camper over the rough terrain up the hill to the level spot that will someday be a garage/outbuilding.  We had two incidents of bad luck:

1.        The camper jack broke.  Once the camper was hooked onto the truck hitch, the jack disconnected and would not go up or down. It also would not support any weight.

2.       We discovered that our power cord had melted on the male end.  It would no longer work or support the load required for running electricity to the camper.

Since we strive to be solutions oriented, we came up with the following fixes.  We used a car jack to lift the camper tongue off of the truck hitch and supported it with a stump and blocks until we can take it apart to fix it.  We used a different extension cord and are limiting what we run for power until we can get a replacement cord….no hot water heater and microwave running at the same time anymore.

To protect against the cold we insulated the base of the camper with hay bales.  While the poor camper looks like the dog car from Dumb and Dumber, we are confident it will make a difference once the weather turns.  We can only hope no one leaves the gate open in case the cows come in and eat our insulation!

These are the problems of living in a camper off grid.  They are not big problems and we are so grateful for the good weather, the good friends and neighbors we have for support, and for having a roof over our heads.  Once we get in the house, we probably won’t know what to do with all the room, a real toilet, and not feeling like we are living on a boat when the wind blows.  We are up to the challenge, so we say since we have had 70 degree weather for the last few weeks.

Here are some updated pics of the house with the awesome siding.  We are hoping the roof goes on this week, as well as some stairs to the loft and other things.  Our builder and crew are awesome and even worked this Saturday. 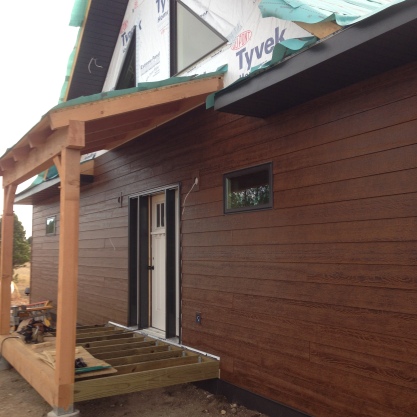 3 thoughts on “A Minor Change in Plans”