This past weekend my parents, my sister, and my nephew all came to see us.  They stayed in a cabin here at Fort Welikit and were quite impressed with their vacation digs.  The cabin is one big room, but it has an AC, a ceiling fan, a bathroom with a shower, a kitchen with stove, microwave and coffee maker, and a TV!  They were quite surprised because they were expecting an older more rustic place and an outhouse.  The cabin backs up right to the woods and there is a deck on the back where deer come out of the woods to eat every morning and evening.  The first night Dave built a fire and we had burgers, dogs, potato salad and of course roasted marshmallow.  It was hot that evening, but there was a nice breeze and no bugs…..welcome to camping in South Dakota. 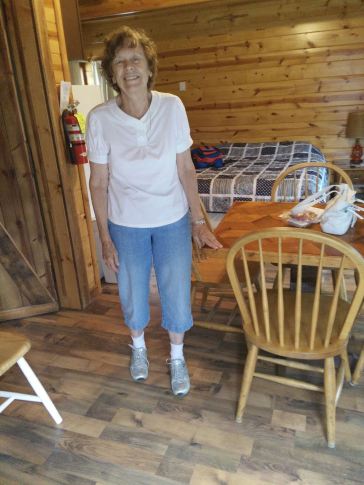 Mom in the Cabin

The next­­­­­­ day, we took them to see the driveway and the hole….aka…the build project.  There was actually quite a bit of work completed in the basement so the house is really starting to take shape.  Next we ran down the road to say Hi to Cowboy Dave and Linda.  Linda showed my nephew her chickens and cows and her sweet dog Arrow liked playing with the young guy.  We didn’t stay long as we had plans to go to Hot Springs and see the Mammoth Archaeological Dig and then go to the Evan’s Plunge.

We couldn’t have asked for a nicer day with highs in the low 80’s.  The Mammoth dig was pretty interesting; it is a massive archaeological dig where they have uncovered 60+ mammoth fossils.  Then we went to the natural hot spring pool named the Evan’s Plunge.  My sister and nephew went swimming and all the people that did not want to don a swimsuit (Mom, Dad, Dave and me) watched from an observation deck.  We returned home through the beautiful Wind Cave National Park and saw magnificent American bison (buffalo) grazing all through the park.

We returned home and had a birthday dinner for my Dad.  I made spaghetti and Dave made artisan bread and we had a big salad.  My sister bought a cheesecake and we celebrated Dad’s birthday by the campfire.  Another pleasant evening, perfect weather and no bugs!

Sunday we headed up the Iron Mountain Road to visit the ultimate shrine to democracy, Mount Rushmore.  Iron Mountain Road is a must-see if you come up this way.  It has 3 narrow tunnels that frame the monument as you approach from the distance.  The monument itself is glorious.  It is your patriotic duty as an American to see the big heads at least once.  We had Thomas Jefferson vanilla ice cream at the visitor center. Apparently TJ not only wrote the Declaration of Independence, but he also wrote the first recipe for vanilla ice cream in the US…and it was good!

Mom and Dad at Mount Rushmore 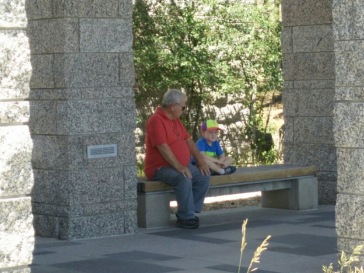 Grandpa and Grandson at Mount Rushmore after delicious ice cream

We drove back to the camp and had supper and rested up a bit.  We drove that evening out to Crazy Horse to watch the night blast.  We had to wait awhile, but the explosives were awesomely loud and bright and it was worth the wait.  It was much cooler that night, lower 60s with a breeze, but no bugs!

We spent the last day at Reptile Gardens in Rapid City.  My nephew really enjoyed looking at the snakes and gators and petting the giant tortoises.  The crocodile show and the snake show were pretty good and so were the buffalo burgers at the snack bar.  That evening we went to the Circle B Chuckwagon Supper in Hill City.  This was a lot of fun as they have a ton of activities for the kiddies including shooting wax bullets and panning for gold.  Right before supper the “Sheriff” rounds up all the kids to form a posse to catch the Biscuit Bandit who has stolen some of the biscuits.  He swore them all in as deputies and they swore to catch the bandit “BECAUSE WE’RE HUNGRY!”  The kids ran around the grounds until they found the bandit and then there was a big dramatic shootout with the bandit and the sheriff.  After justice was served up to the bandit, we went in for chuckwagon supper: beef, beans, biscuits, applesauce, spiced cake and coffee.  It was pretty good but the real treat was the entertainment.  They have a band that plays real old cowboy music, modern country, and some patriotic songs as well.  They were really talented and I think my parents really enjoyed the show.

Panning for Gold at the Circle B

Deputization of the Posse 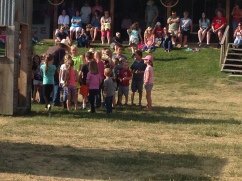 Preparation to capture the Biscuit Bandit 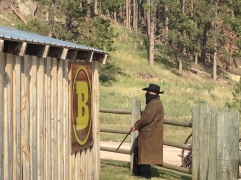 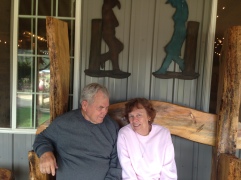 Mom and Dad on a date at the Circle B

Well, after wearing everyone out, they headed down the mountain and back to Iowa.  It was sad to see them go but it was great to get to see the family and spend some time with them.  We’ll see who wants to come back in the winter!

Vacation, What to do in Custer

3 thoughts on “Three Generations of Meadows Invade the Black Hills”