A Trip to the Vet and a History Lesson

We had made plans to be at Cowboy Dave and Linda’s at noon to help with loading five 4 month old calves for a trip to the vet.  When we arrived Cowboy was doing some repair to the trailer, the light bar on the top had come loose from one end and needed to have the hole drilled out and a new rivet installed.  Reef climbed up on the side of the trailer using the spare tire as a platform to work and fixed the light.  Next we needed to get the young calves that had recently been separated from their mothers into the trailer; this was not all that difficult for us with the setup that Cowboy Dave has built.  The mother cows and the calves were quite unhappy about being separated, and they made sure everyone knew it.  They mooed and hollered, crying for each other.  It was pretty sad, and even though we explained to them it was just temporary, they continued their loud protest.  Linda packed us a cooler for snacks and drinks and we were off to the vet in Edgemont.

Ahead of schedule, Cowboy Dave said, “I want to show you something.  Instead of taking Hwy 18 15 miles into Edgemont, we are going to take this dirt road 17 miles to get there.”  So off we went down Pilger Mountain Road, a gravel winding route that took us through the southern end of the Red Canyon.  The views in South Dakota change so quickly.  One minute you are driving through the green farm and ranch land of the Southern Hills, the next you are up over a ridge and into a canyon with red rock on all sides.  Towering canyon walls with abandon mine shafts and shelf roads box in the road that runs by a stream.  There are “cattle at large” throughout the canyon, and it feels like you wandered back in time to the late 1800s.  There are several old buildings, a livery station, old home sites, abandoned shacks that housed settlers, ranchers, and Americans in search of freedom and fortune (like us only 150 years ago!)

Cowboy Dave pointed out the site of the Metz family massacre in 1875.  The canyon is hour glass shaped and at the pinch point, a family that was leaving the Black Hills, fortune in tow, was murdered.  It was reported to be Indians, but later discovered that there were boot prints in the mud indicating it was probably outlaws.  See the link below to read more about this site:

17 miles later we arrived at the Cheyenne River Animal Hospital, where we unloaded the calfies into the paddock.  Reef ran the squeeze gate to direct the calves into the chute.  One by one the little calves were funneled through the chute, trapped and treated.  All the calves were inoculated with the bangs vaccine, protecting them against brucellosis and officially allowing them to be transported anywhere, even across state lines.  They were given a pesticide treatment along their backs to prevent parasites and protect against ticks and their ears were “fly-tagged” providing additional protection against pests.  We were told the ear tag works so well at keeping flies away that the older cows will often go and stand over the head of the calves to take advantage and get the flies away from their bellies! 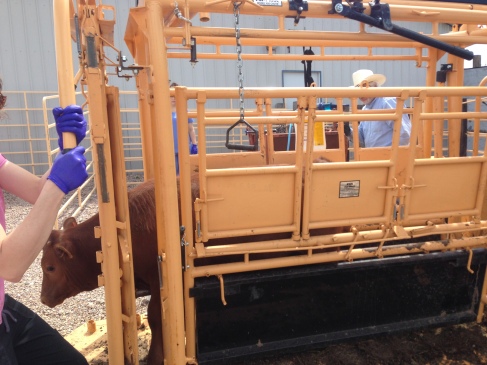 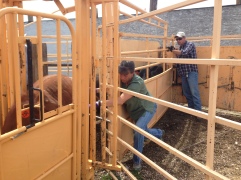 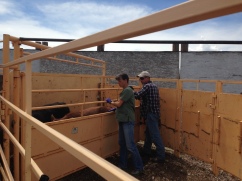 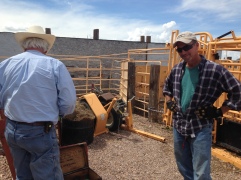 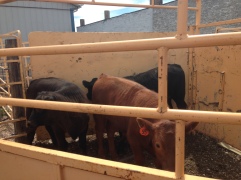 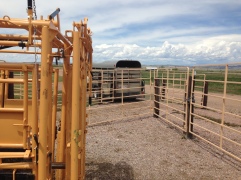 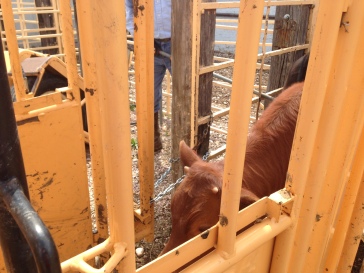 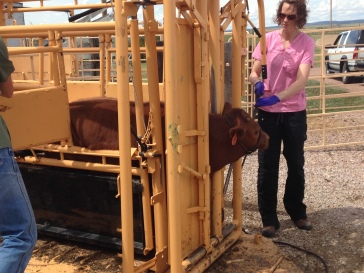 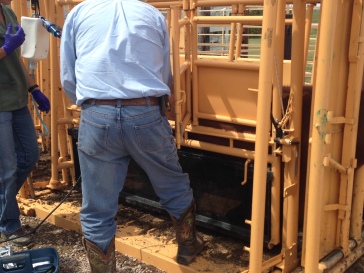 Dr. “Steffie” or Dr. Stephanie Stevens did the work while mentoring two young aspiring veterinary students.  She is a great doctor, efficient and careful, and she commented on how healthy and great Cowboy Dave’s calves looked.  Then, Cowboy Dave stepped up to brand his calves. He used an electric branding iron which heats up to a very hot temperature very quickly.  It is his personal brand, which reads SR but on the side.  It stands for “Stage Route Layover” so the sideways brand represents the “lay-over”.  Cool! Cowboy Dave quickly and as kindly as possible did the branding for four of the calves and Reef got to put his cowboy skills to the test and brand one of the little heifers, too.  Good job, Reef!

We loaded the five calves back in the trailer and headed back up the road to the High Lonesome.  Cowboy Dave’s plan was to leave the calves in the trailer and let the Mom Cows out of the corral.  He said they would want to see their babies and he would take advantage of that need to lead the cows back to the pasture.  Cowboy Dave sure knows his cows; he let the Mom Cows out and they went right to the back of the trailer.  He drove the trailer down the road toward the pasture, and Reef rode “outrider” in the Mule with Hercules and Arrow along for moral support.  The outrider is supposed to herd back any renegade cows that decide to stop following where they are supposed to go.  Jen and Linda rode in the “drag” position, bringing up the rear in the Tundra, putting some pressure on the cows from the back to keep them moving forward. It’s called the drag position because it is a drag eating all the dust from the round up!   It was a fairly easy round up, all those cows wanted was their babies and they were running and mooing the entire ¾ mile stretch.  Once released from the trailer, the newly branded babies went right to their mamas and started milking. Cows have very strong family ties. 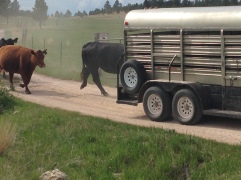